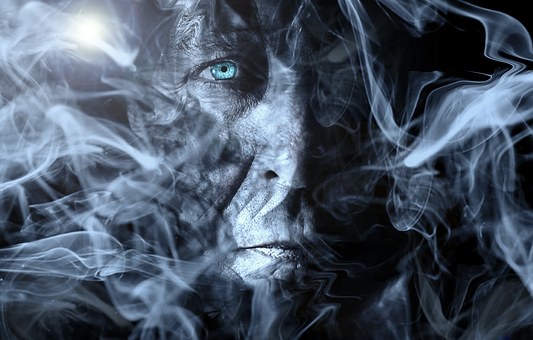 See the guy as he turns into smoke?  Yes, imagine cells of humans being random, being disordered and it might look like our smokey post guy.

Bear with me.  I need to convey a complicated, multi-layered piece of logic about the existence of all things on a two dimensional screen using only words.  Easy enough, right?

Random (from Dictionary.com): adjective
1.proceeding, made, or occurring without definite aim, reason, or pattern:

the random selection of numbers.
Ordered (also from Dictionary.com):  adjective
1.neatly or conveniently arranged; well-organized:
an ordered office.
2.done according to specific principles or procedures:
an ordered method of assembling the parts.
3.conducted according to certain precepts or rules:
an ordered way of life.
Ok, so we understand the difference between random and ordered.  Order implies symmetry, pattern.  Random implies a lack of pattern, aimless, without reason.
Now I need you to stretch your mind and think of a universe without order.  I mean without ANY order at all.  None.
No fractals.  Meaning no repeating patterns, no snowflakes.
No fibonacci spiral, meaning pineapples and seashells and leaves and such would be a lumpy mess.
Actually they would not exist because DNA is order, and order does not exist in this imaginary universe.
No rules of physics.  Gravity is entirely random.  The sun does not exist because the reactions that fuel it are ordered and documentable.  But if it did exist, it would sometimes shine and sometimes not.
No orbits and no set rotations.  Random would be tumbling on three axes (four or more, actually, if you really want to get serious).
No time.  No arms on both sides of the body.  If there could be children, they might look like a duck or a coffee pot.  But again, there could not be humans, much less children or ducks or coffee pots.
Even time would be unordered and a mess.  One second would not fall after another.  There would be no linear time.  There would be no spacetime.  There would be bits of a second here, then an hour there, then backwards 4000 seconds.
Matter itself would be in question–electrons would not be bound to atoms.  Atoms would not bind to make molecules.  No element would exist twice.
Just ponder that for today.  Look for every bit of order, from your physical world to the written word to customs to thoughts.  Go big, go small.  Stretch your brain.  Every single thing that follows any sort of predictable path from cooking with heat to your furniture not randomly turning into spiders is gone.
We’ll chat more tomorrow.